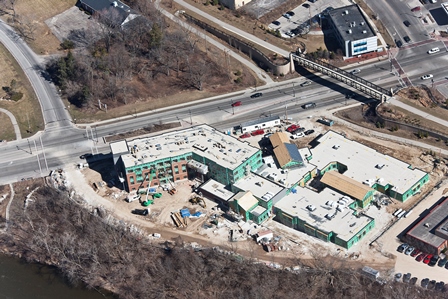 HRA proposed a continuous facility, having the front section along Capitol Drive as a 4-story assisted living with 60 units and a 1-story memory care with 36 units in the back section. 55 parking stalls will be provided underground for staff. View the HRA PowerPoint (PDF) for more information.

HRA met 3 times with the Plan Commission in July - September 2013.

To project includes a new public road along the west side of the parcel, including a sidewalk, lights, and on-street parking. The entrance will be along Capitol Drive with a porte-cochère element as shown in the above plans. The project proposes developing the front 2 parcels of the River District. The road will also access the existing back parcel that has a vacant light-industrial building.